My Experience with the New SAT 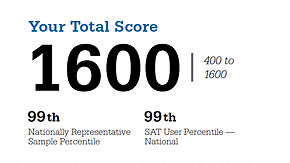 Yesterday, I dragged my old self down to the local high school to find out what this new SAT is all about. I got out of bed around 7, got dressed, and did a couple of stretches and exercises (an abbreviated version of the workout I do every morning). After eating a bowl of cereal, I grabbed my calculator, #2 pencils, and admissions ticket, all of which I had set out the night before. I hopped in my car and made the quick 8-minute drive from my house to Peachtree Ridge High School.

My admission ticket said to arrive by 7:45, but I probably didn’t walk in the door until closer to 7:50. There was a long line, so I queued up along with the rest of the students taking the test, trying my best to look 17 years old! I got to the classroom at 8:15, but sat there for another 30 minutes waiting for kids to trickle in before finally getting the go ahead to start. I believe we were one of the last rooms to get started at nearly 8:45.

The reading section was first: 5 passages, 52 questions, 10-11 questions per passage. We had 65 minutes to complete. The time pressure was way less intense than it is on the ACT. On the ACT, you have 35 minutes to do four 10-question passages; here you get 65 for five 10-11 question passages—almost double the amount of time for only a 25% increase in questions. One passage was fiction, the other four were nonfiction. The topics of the nonfiction passages ranged from women’s suffrage to the environment to studies about the brain. None were overly boring; some I even found interesting. I finished the section with about five minutes to spare, and took the remaining time to review a couple of the more challenging questions I had marked earlier (Tip: use your test booklet to star tough questions to come back to if you have extra time).

We got a 10-minute break after the Reading. I got up went to the bathroom and spent the entire 10 minutes outside the classroom. (Tip: don’t stay in your chair during the break. Get up and do something.) The writing was very similar to the English part of the ACT, albeit shorter (35 minutes, 44 questions vs 60 minutes, 75 questions). This section was a little bit of a blur to me. It was divided up into four passages, 11 questions each. I know I finished on time. For the most part the questions were the same as the ACT English, but there were a few that were different. At least two questions dealt with looking at a graph (almost like the ACT science).

After writing, we dove right into Math-No Calculator. This was a short section, and the one I came closest to running out of time on. I hit one question toward the end of the multiple choice that I didn’t know how to do and took me a while to figure out. In fact, I guessed on it after I had wasted a lot of time. I quickly breezed through the grid-in section, but there was a hard one at the end of that, which also took me some time. I ended up with only a minute to go back and look at the one I had guessed on earlier. I thought I was right but wasn’t sure.

Before the Math-Calculator section, we got a 5-minute break. I spent the time thinking about the question I was unsure of and eventually figured out that I got it right (Yay!!). I found the next math section super easy. I finished it with over 8 minutes to spare, and had over 5 minutes left even after double checking all of the questions I thought had potential for careless mistakes.

I thought the test was over at this point, but the proctor said there was a fifth section. Even she seemed confused by it and asked us if our books really contained such a section. Once we confirmed that it did, we all hunkered down for an extra 25-minutes. Our experimental section was math. I wasn’t on my A-game on this section, and I know I missed at least two. One I figured out right after time was called and realized my answer was wrong; the other was a grid-in that I skipped and never got to come back to.

I found the test much more fair than the old SAT. I even liked it better than the ACT because of the decreased time pressure. Some of the questions were still tricky. You still need to know your stuff. I know a lot of bad things have been said about this new test. I, myself, wanted to hate it, but in reality, I think it could provide a great alternative to the ACT for slower test takers. Additionally studying for one test (ACT or SAT) will now help you on the other much more than it did before.